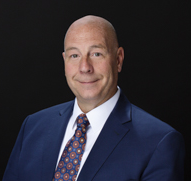 Rob was born in Salt Lake City, the son of Robert A. and Rosalie Anderson Larkin. He is a fifth generation funeral director, receiving an associates degree in accounting from LDS Business College in 1985. In 1986-87 he went on to receive his mortuary science degree from Cypress Junior College, in Orange County, California. Rob went back to school in 2012 attending Western Governors University where he earned his bachelors of science degree in business management. He has been a Utah licensed funeral director and embalmer since 1988. Rob earned his Certified Funeral Service Practitioner certification in 2014 and his Certified Crematory Operator certification in 2015.

Rob currently serves as Executive Vice President of Larkin Mortuaries and it’s subsidiaries. He also manages The Rose Shop and Le Jardin for the Larkin family business. He also served as President of the Utah Funeral Directors Association (2015-16), he serves on a program advisory committee for the Salt Lake Community College Mortuary Science program and he serves on the facilities committee for The Tracy Aviary.

Rob is married to his high school sweetheart, Robyn Jensen. Together they have four children, Natalie (Rory) Allen, Nick (Melissa Sharples) Larkin, Kylie Larkin and Courtnie (Sione) Sitake. He has 11 grandchildren, who he adores immensely.

Rob enjoys being a grandpa, traveling, serving as an ordinance worker in the Salt Lake Temple from 2015 to 2020 and currently serving as an ordinance worker in the Jordan River Temple, teaching step aerobics from (1999-2014), gardening and collecting rare and exotic plants. Rob is also a Master Gardener and has given several lectures on growing exotic plants. He loves the challenge of growing subtropical plants, including hardy palm trees, in his Sugarhouse garden.