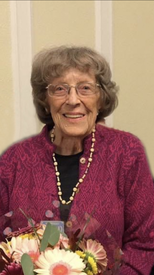 Rosa Mae McClellan Evans Christensen passed away of natural causes on May 19, 2021, at her home in Murray, Utah. Rosa Mae was born in Venice, California on November 3, 1922, the seventh of ten children of David A. McClellan Jr. and Hortense Langford, and the first in the family to be born in California. In those years, the neighboring subdivision of Mar Vista was a developing community not far from the beach and the canals of Venice. Her father helped build the Mar Vista Ward building, and she grew up with a group of close neighborhood friends who were like family.
She graduated from Venice High School at age 16 and attended Santa Monica Jr. College where she studied Gregg shorthand, typing, and accounting courses which prepared her for employment at Douglas Aircraft as a private secretary and stenographer. The McClellan children worked hard to earn their own way and contribute to the family.

She was called to serve in the Spanish American Mission (1944-1946) based in El Paso, Texas. It was in El Paso that she met her future husband, Robert Evans, just before he completed his mission and enlisted in the Maritime Service. After many months of correspondence, they were married on February 14, 1947, and began their life together in Salt Lake City.

Rosa Mae and Bob became the parents of four children. She was a skilled seamstress. She made clothing for her children, little shoes for babies that ZCMI sold, and an elegant wedding dress for a granddaughter. She also found great satisfaction working in her beautiful garden. She was very interested in reading about nutrition, although the kitchen was never her forte.

When her youngest child entered pre-school, she enrolled at the University of Utah where she earned a teaching certificate with a major in Spanish and a minor in German. She taught Spanish at West High School, and later, Spanish, German, and English at Brighton High School. She was a talented, dedicated teacher and loved her students. Many years later she earned a Master’s degree from B.Y.U. in local and family history. She researched and wrote several histories of her ancestors. After she retired from teaching, she went right back into the schools and worked for Salt Lake City School District, testing “English as a Second Language” students until her hearing became a problem.

Rosa Mae was the grandmother of 15 grandchildren, 27 great-grandchildren, and 4 great-great-grandchildren. She had an annual Children’s Day breakfast in her backyard where the kids enjoyed food, games, and water activities. When little grandchildren came to visit, they were gifted with a baggie containing Oreos, chips, Skittles, and M&Ms (both salt and sweet in the same baggie) as they reluctantly left to go home. An adult granddaughter said, “I’m going to miss her knee-slapping laughs, unapologetic sneezes, and seeing her stand in her open doorway until I had fully driven away. She was the best.”

Rosa Mae was a person of faith and a life-long member of the Church of Jesus Christ of Latter-day Saints. She served in various leadership positions in her wards and stakes. In her 80s, she especially loved serving on Temple Square where she taught English classes to the foreign sister missionaries who were serving there.

She was a tireless caregiver, even in her old age. At age 88, after the death of Bob, to whom she was married for 63 years, Rosa Mae surprised the whole family by marrying Bob’s best friend, Milton Christensen, who she enjoyed and cared for during the next seven years until he passed away. She led a busy and productive life and was upset at having to give up driving at age 96 because, although she still had perfect eyesight and made excellent turns, she couldn’t quite remember where she was going. Her final few years of advancing dementia were a tough road for her to travel.

The family greatly appreciates the service of Dr. Stephen Aslami and the personnel at Canyon Hospice, and for the many hours of care, Rosa Mae received from her children, in-laws, and grandchildren. Rosa Mae is survived by her four children: Janet E. Packham, Robert J. Evans, William J. Evans, and Thomas D. Evans. She is also survived by one brother, Donald L. McClellan, and her wonderful grandchildren.

I'll always have special memories of aunt RosaMae, her sense of humor and wonderful laugh. Say "hi" to Mom for me.

Our wonderful friends Janet & Steve, you were such great examples in the car8 e you gave your mother. She was a special lady. May you find comfort with your siblings in her graduation day. We love you, Blessings

Rosie was a radiant, caring, thoughtful and loving spirit that we had the honor of knowing. We shall always remember her infectious laugh and sense of humor. She shall always be remembered and spoken of, with great fondness. We will miss you!