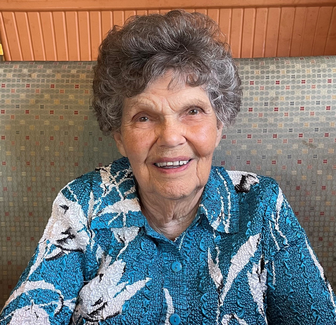 Virginia Ellen Milliron was born in Somerset, Pennsylvania, on February 27, 1929. She died on Sunday, November 6, 2022, in Salt Lake City, Utah. Virginia was the only daughter of George A. Walters of Turkeyfoot, Pennsylvania, and Sadie F. (Pyle) Walters of Chickentown, a township near Somerset. Two years after Virginia’s birth George and Sadie welcomed into their home Virginia’s four-year-old cousin, Fadra Reichard. Fadra and “Ginny”, as Virginia preferred to be called, grew up as sisters during the Great Depression and continued their close relationship throughout Ginny’s life.

Ginny met her husband, James Stewart Milliron, at Otterbein College in Westerville, Ohio. They were married on Thanksgiving, November 27, 1949. Jim and Ginny shared 70 amazing years of marriage during which they had three sons – Vaughn, Greg, and Mark. In addition to raising three boys, Ginny earned her bachelor’s degree in elementary education in 1956 and became a schoolteacher in 1957. She taught all grades of elementary school, receiving accolades and awards from school districts in several states. Ginny loved her profession and blessed the lives of thousands of children through her nearly forty years of teaching. During those years she also earned her Master’s Degree in Literature from the University of Redlands, an achievement that brought her particular pleasure.

Jim and Ginny moved often, living in over half a dozen states and over forty homes during their seventy years of marriage. In 1985 they moved to Weber County, Utah, purchasing a home in Eden. They lived in several homes in Utah before Jim passed away on September 24, 2019. For the past year, Ginny has been a resident of The Ridge Foothill Assisted Living Center in Salt Lake City.

Ginny was a person of Christian faith, a devoted wife, and a loving mother. She said she had met Christ at a very early age and never doubted His reality in her life. Her greatest joys were seeing her sons become Christians and establishing Christian families. The greatest sorrows of her life were the death of her son Greg in 1983, followed by Jim’s death in 2019. Ginny is preceded in death by her father and mother, her husband, and her son Greg. She is survived by Fadra Reichard, her two sons Mark and Vaughn, and their families including six grandchildren and six great-grandchildren.

Everyone is invited to join the family in celebrating Ginny’s life Saturday, November 12 at 2:00 p.m. at Larkin Mortuary, 260 E. South Temple in downtown Salt Lake City. In addition, a special memorial service will be hosted by the family on Monday, November 13, at 1:30 p.m. at the Ridge Assisted Living Center located at 2363 S. Foothill Drive, Salt Lake City. In lieu of flowers, contributions may be made to MasterPeace Ministries at www.masterpeaceperu.com