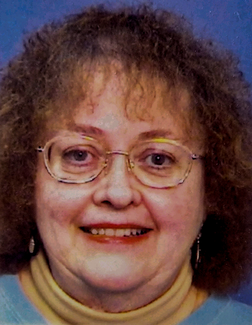 Adrienne Scowcroft Willey Larson passed away on November 1, 2022 at age 86 due to the effects of dementia. She was born March 22, 1936 in Salt Lake City, Utah to Emerson Cannon Willey and Blanche Scowcroft Willey. While a teenager, she enjoyed figure skating, skiing, and working summers at Yellowstone National Park where she occasionally shared the lodge kitchen with bears.

After attending East High, she met Robert August Larson while playing in the drum line of the University of Utah Marching Band. They later married on December 21, 1957 in the Salt Lake Temple. They raised Doberman Pinschers, including a grand champion and two champions. She rescued cats and dogs all her life, from a Great Dane to a Labrador Retriever to her beloved Whippets.

A devoted supporter of scouting, she served in nearly every volunteer capacity of scouting for many years and saw nearly all of her “cubs” go on to become Eagle Scouts. Also a patron of the arts, she served for many years on the Board of Directors of the Utah Youth Symphony. She loved spending time outdoors, especially at the family cabin in the mountains, and proudly served as a volunteer for the 2002 Winter Olympics.

A graveside service will be held at Salt Lake City Cemetery at 12 PM on November 15th. In lieu of flowers, please consider planting a tree in Adrienne’s memory.

My deepest condolences to your family on the passing of Adrienne. I enjoyed working with her at the law library for many years. She had a great sense of humor and was missed when she retired. She truly loved her family and had so many good things to say about all of you. What a wonderful person she was!
Suzanne

My deepest sympathy to your family with the passing of your very talented and loving mother. I enjoyed a wonderful friendship with her and your family when we were much younger and were raising our families in Sandy. We worked together in cub scouts for several years. It was so fun and we did some great activities together with a great group of cub scouts. I admired her and appreciated her many accomplishments. I am so grateful for the memories we share together. Your family is amazing and I know she is so proud of you and all that you are doing with your families. Thank you for your loving care and devotion during her last challenging years. We will always remember her example and feel her love and devotion. My thoughts and prayers will be with each of you. With loving concern, Pat

So sorry to hear of Adrienne's passing. She was a great mainstay as cataloger at the University of Utah Law Library! Condolences to the family.