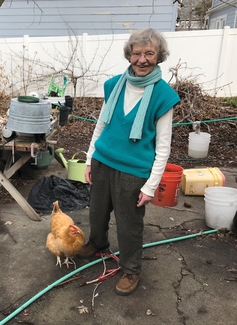 On November 17, 2022 the garden pulled up its leafy blanket one last time. Our mother, grandmother, great-grandmother, friend and beloved teacher laid her burden to rest in her home in East Millcreek after ninety-one years.

Betty was born in Bradford, West Yorkshire, England on April 22, 1931, as her favorites daffodils were blooming on the hills between the dry-stone walls of the green hills above the River Aire. They made Earth Day in honor of our Earth Mother, from the first a force of nature.

Named Frances Elizabeth Maud, in part for “her” queen who shares this death year, Betty was the only daughter of a warp twister, Arthur Henry Maud, and a seamstress, Frances Lyda Whitaker. Her older brother, Ralph Noel Maud, preceded her in death. Her younger brother Arthur, with whom she sang in St. Mark’s choir in Utley, now lives in Minnesota. You can look up both of her brothers in Wikipedia.

“I was the safest child in England,” she used to say. The eight years of bombings and rationing of World War II nonetheless left her unable to tell much of that good half of her childhood, apart from the time she, alone at home, had to hold up the blackout cover over the window with a broom handle. More than one grandchild wrote up that story “The Night Betty Maud Saved England” for a class assignment.

She attended Keighley Girls’ Grammar School, where she was known as “Swot Maud”: “swot: [Brit. Colloq.] to study hard.” Our cousins called her St. Betty.

After the War, her mother moved the family to Salt Lake to join many aunts, uncles and cousins who had already immigrated, drawn by the LDS Church.

With a good British education, Betty already knew more than they could teach her at West High, so she immediately enrolled at the University of Utah. She was active in the Foreign Students’ Association, lost her Yorkshire accent the night before she had to teach her first class as a graduate student, and earned a Master’s in mathematics with a project on an old Marchant calculator to aid the US military.

On June 13, 1953, “under a quadratic sign”, Betty married her professor, Richard Eliot Chamberlin, who preceded her in death in 1994. Together they raised six children: Ann (Curt Setzer), Ralph (Ute Kallmeyer), Fran, Martha (John Sechrest), Alice (Keith Quigley), and Helen (Russell Hill), most of whom earned higher degrees in the sciences. She sewed our unfashionable clothes but was the best math tutor. Even though she didn’t approve of fiction, she did approve of good grammar and spelling, and helped there, too, beginning with an English children’s dictionary—not so much help in the spelling department.

Besides these six children, Betty quietly and lovingly helped raise ten grandchildren especially Liz (Davies), Nathaniel, Katherine, and Emily Quigley while their mother Alice fought cancer to then pass away while they were all very young. Seven great-grandchildren, twenty-four foster children, scores of Primary children and hundreds of Head Start (in South Salt Lake) and kindergarten (in Millcreek) children also felt the effects of her care. Betty saw to it that no kindergartener graduated from her classroom to the strains of Respighi without knowing the basics of reading. “I always liked it when a child called me ‘Grandma’ by mistake,” she said.

After retiring, Betty continued to volunteer in the elementary classroom and with genetic studies at the Huntsman Cancer Center. She loved to sing in any choir, including the Utah Shape Note Singers.

More than anything, our mother loved her garden. Very little that she fed us was not grown, canned or frozen by herself, including the grinding of her own wheat for bread: everything from the spring’s first fresh peas to bottled pears in a Christmas salad. When an attempt was made to take her fingerprints for her volunteer work, it was discovered that she had none; she’d worn them away in the dirt.

Betty eventually inherited the house and half an acre in East Millcreek that began as two adobe rooms our great grandmother moved into when she was widowed with thirteen children. For us, it was always “Grandma’s house”, and Betty had learned from her mother-in-law which apple trees had come across the Plains in a covered wagon and how to fight for her irrigation rights on the Brigham Young Ditch. Every kitchen scrap went through egg-laying chickens to compost. And every rose bush she planted had to provide fragrance, too.

Earth Mother Betty refused to own a dryer, even when she had three in diapers, so no one was surprised when she slipped on a rock hanging laundry on one of the last warm, clear, sunny days of 2022. She lay for hours under a cloudless Utah sky with a broken hip unable to reach her old flip phone.

How she loved the Yorkshire rain.

Farmer slips on a
rotted peach, prays in silence
for the killing frost.
--a haiku our mother helped write for a daughter’s high school English class

The daffodils our mother planted will bloom again.

apologies for not attending your viewing
Betty was always a constant in my life. to have Betty and her family as neighbors was a gift from heaven.
To learn Christianity from her every day activities and examples was a gift.
To get to know her daughters who literally carried our newly arrived family on their shoulders was a gift
Betty was a spirit melodius, she found books in running brooks, sermons in stone and good in everything.
Thank you Betty for the example and the memories

I worked with Betty during her many years of volunteer work at Huntsman Cancer Institute. Her dedication and work ethic was truly inspirational. She had a passion to help eradicate cancer and ease the suffering of others in any small way she could contribute. She entered data into a pedigree drawing program for us, to help us visualize each family's unique risk of cancer. At 86 years young, I had to ask her to complete CITI training, so she could continue her work on our studies. She took extensive notes and discussed what she had learned in each module with me. She was truly a lifelong learner - something we should all strive to be. When I told her the training had to be repeated every three years, she joked that this "might" be her last time completing it. In 2020, the COVID pandemic kept her away from us. I called her once to check up, and she talked about her family and her garden - her true loves! Betty made an impact here at Huntsman Cancer Institute that will be felt for years. She never wanted awards or accolades, but she deserved them for sure! Sending my love and condolences to her family. I can only imagine what fantastic people must be in her pedigree!

I had the honor of knowing Betty from her time as a volunteer at Huntsman Cancer Institute. She was endlessly kind and seemed to teach me important things each time we talked. One day at work, I complained about daylight savings time and she spoke of how time in England during the war was adjusted two hours in order to mitigate the effects of the relentless bombings. I vividly remember having the opportunity to visit Betty at her home. I brought my young son with me and she blessed us with a tour of her magnificent garden. Fifteen years later, that memory seems like a happy dream. What a peaceful place and, in it, an angelic soul that touched my life forever. Thank you, Betty.

I’m sort for your loss. Betty was my son’s Head Start Teacher on State street. She also recommended me to work for Head Start through Granite School . Which I did. 21 years working with Special Education also with Salt Lake School District. I have pictures of her in her classroom for Halloween on State Street. A beautiful woman. Thank you Barbara Gallegos

We are missing Betty so much! We send out love to all the family. We are so grateful for being neighbors with Betty for many, many years. Her kindness, quite demeanor, and lover for her garden are cherished memories. I will especially miss our chats in her garden. Unfortunately, because of Covid we will not be able to attend the visitation, but we sent our love and condolences to all the family. With Love, Lynn and Sally.

Sorry to read about the passing of your mother. She was truly a wonderful woman. Condolences to all. Jane Gosford Haugsoen.

I only met Betty a couple times, but this photo just says so much about her love of gardening and the outdoors. Heartfelt condolences to the family.

Our dear sweet Betty,
The neighborhood will just not be the same without you. The years we have had with you will always be cherished. We are going to miss you so much! We are however, grateful grateful for the sweet reunion you are having at this time in your journey to be reunited with your husband and sweet sweet daughter. We love you and your family so much!
Love,
The Nichols Gang

I only have fond memories of Betty. When my grandmother, Nedra, suffered a stroke and was forced into a care facility, Betty could frequently be found just sitting with her keeping her company since Nedra couldn't communicate.

A true example of love and selflessness.

My love and condolences to those she leaves behind.

So grateful to have had Betty as a neighbor! She’s been a positive influence on our family. She was a quiet force for goodness in our East Millcreek area. Betty will be remembered with fondness❤️

Ann, I am so sorry for your loss. Every girl needs her mom! May your happy memories bring you comfort at this time of grief.