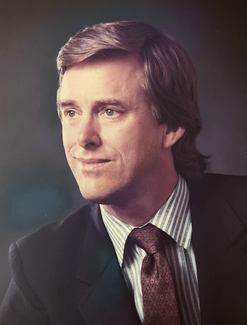 James Mecham Ferguson passed away on November 21, 2022, at the age of 81 in Salt Lake City, Utah. He is survived by his two children, Anne Penrod and Cassandra Ferguson; five grandchildren, Nick, Cole, Milo, Isabel, and Ethan; son-in-law Jason Penrod and father of Ethan and Isabel and close family friend David Hadley; sisters Margaret Ferguson and Anne Waldman; and the adoring love of his life for 53 years, Susan Janss Ferguson.

James spent his early years in Bremerton, Washington, walking to and from school in the drizzle and hunting geoduck clams along the tidal flats of the Puget Sound. During his high school years, his family, including his mother, Mary, father Vaughn, and sisters Margaret and Anne, lived in Palo Alto. He earned the rank of Eagle Scout and attended both Gunnison and Paly High. More interested in chemistry than athletics, James was reported to have blown up his family’s garage during an experiment.

Staying close to home for college, James attended Stanford University, majoring in psychology. He continued on to medical school at Stanford, and spent his years there working in the lab of sleep medicine pioneer William Dement, a psychiatrist. Later James would go on to publish major papers across the spectrum of mental health disorders, including depression, anxiety, eating disorders, and Alzheimer’s Disease.

During James’ medical school years he met his wife, then an undergraduate, in the lobby of Lagunita Hall on Stanford campus. Surviving her family’s suitor vetting process via family camping trip to Yosemite mountains, Jim was permitted to propose marriage. Surrounded by family and friends James and Susan married on a snowy winter night in Sun Valley, Idaho, with guests carried to the party in horse-drawn sleighs.

The newlyweds moved to Salt Lake City so he could complete his medical internship at the University of Utah, where their first child, Cassandra, was born. Later James would specialize in psychiatry, returning to Palo Alto for his residency, where his second daughter, Anne was born. The young family moved to San Diego where he opened a practice specializing in eating disorders. Eventually they moved back to Salt Lake City where James refocused his career, starting a business, Pharmacology Research Corporation, that specialized in clinical research trials throughout the Intermountain West.

Although James had frequently traveled around the country and to Europe for business, following retirement he and his wife travelled to destinations he had long dreamed of visiting. The two trekked around Mount Blanc, cruised on a boat around Croatia, and adventured on a safari in Kenya. They went on trips to paint in Southern Utah, hiked central Utah, and gathered the family, including all the grandchildren, for a week-long backpacking trip in Idaho’s Sawtooth Mountains.

James and his wife collected art, with tastes that evolved from abstract expressionism to historical Utah landscapes, and they took an interest in supporting local artists. Despite the appearance of progressive supranuclear palsy, a progressive disease that would rob him of movement, late in life James particularly enjoyed seeking out woodcuts by Chirua Obata, a Berkeley artist who had been interned at Topaz. The masterworks would end up assembled salon style as the centerpiece of his living room, a show of beloved Yosemite scenery underpinned by a reminder of art as a powerful tool of resilience.

Around a decade ago James and Susan were introduced to a tiny 138-year old brick church in Idaho that still serves local community. Charmed, they donated a meditation garden to the church as a space of peace and welcoming to parishioners, neighbors, and passerby who might stop to admire the building. In lieu of flowers the family requests that donations be directed in James’ honor to the Emmanuel Episcopal Church of Hailey. A celebration of James’ life will be announced at a later date.

Dear Susan, Cassie and Anne, I am so sorry to see about the passing of Jim. He was such a special person and I hope you can find some peace in celebrating his life. I remember times with Cassie and Anne so fondly. Art was the glue. And Susan you were so kind to introduce me to Gail Severn, your mother's friend, in Ketchum. I had many wonderful years in her gallery. I am sending my love and condolences to you and the extended family.
Connie xoxo