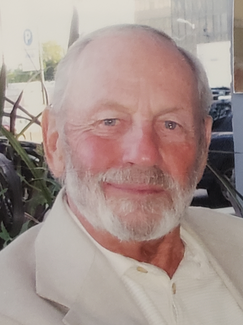 Growing up in Salt Lake City, Bob graduated from East High School and attended the University of Utah, where he was a member of the Sigma Alpha Epsilon fraternity. On May 31, 1957 he married his one true love Nancy Valentine. Bob served for two years in the US Army stationed at Ft. Ord, California. After being honorably discharged he and Nancy returned to Salt Lake where he was employed selling radio spots for KRGO radio. He left that position to form The Robert L. Young Agency, successfully providing group health insurance to local businesses and organizations, until his retirement more than four decades later.

Bob was a natural athlete, who both enjoyed and excelled at individual sports. He was a member of the US Army Diving team at Ft. Ord and an avid skier from a young age who also taught the sport to others at Brighton Ski Resort. He was especially passionate about golf, which he learned while stationed at Ft. Ord. Bob was a member of the Fort Douglas and Hidden Valley Country Clubs for over fifty years, also serving on their Board of Directors, and would play golf several times a week. His highlight was achieving a two handicap and maintaining it for almost a year; his lowlight and biggest regret was never having a hole in one. Not surprisingly, Golf was about the only TV channel he would watch – unless the Utes were playing.

Business and sports, however, were always secondary to family. He so enjoyed the times with his children, grandchildren and great-grandchildren. Skype calls to Maine and the Isle of Man were a regular occurrence as he and Nancy kept up with everyone’s lives. Family traditions were paramount, particularly Thanksgiving when family would fly in from Europe and the East Coast.

Bob and Nancy also led an active social life often hosting cocktail parties and gatherings at their home for friends and neighbors. They were longtime members of Saturday Night Dance Club, where Bob was a past president, and enjoyed hosting members of the family at these events.

Bob was a well-liked people person who believed life should be enjoyed. He was engaging, friendly, positive and generally had an infectious smile that would light up the room. Despite experiencing tremendous health challenges over the past year, he invariably responded to questions regarding how he was doing with, “I feel Wonderful!” At the same time, Bob was a bit unconventional and very much his own man, perhaps best exemplified by his personalized license plate: UBU – IBI. He will be greatly missed and remembered by his loving family and friends.

The family wishes to thank his care-giver, Suzette Ruseler, along with Elevation Hospice and their team members, for the excellent, gentle and thoughtful care they provided at the end of Bob’s life. He requested that no services be held but those wishing to make a contribution in his memory are encouraged to donate to his favorite charity, the Best Friends of Utah Animal Society (www.bestfriends.org/our-work/supporting-network-partners/best-friends-utah).