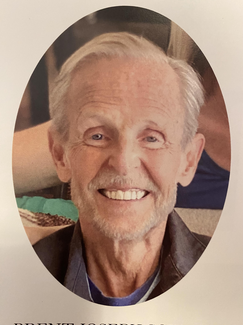 Brent Joseph Schenk was born in Twin Falls, ID on September 30, 1947 to Boyd Frederick and VerLee Hansen Schenk. He was the 3rd of 5 children in the Schenk Family. The family moved to Orland, CA and then Fresno CA for two years at which time they moved to St. Louis, MO. Brent was 11 and spent his school years in Kirkwood, MO. He graduated from High School in 1965, attended a year at a community college and then went on an LDS mission to Switzerland for 2 1/2 years.
After his mission he attended BYU where he got a degree in Psychology and where he met his future wife, Julie Ann Sant. They married in the Salt Lake City temple on August 21, 1972 which also was his parent’s 30th anniversary. Brent and Julie went back to St. Louis where he was employed by a local grocery chain, Schnucks, and he served out his working years thus employed. They moved to Kirkwood, the town where he grew up, and raised their 5 children: April, Adam, Summer, Casey and Baylee. He was really good at keeping up with his kids’ activities and supporting them and their choices of sporting games.
He was a member of the Church of Jesus Christ of Latter-Day Saints and served well in many capacities. He and Julie served two local missions: a St. Louis temple mission for 15 months in 2002 and in the St. Louis Mission office for one year in 2005. In 2010 he and Julie picked up stakes after 38 years of marriage and moved to the mountains of Colorado where they found great enjoyment in nature and with new friends and neighbors. The highlight of those years for Brent was helping his rancher friend, Mike, working on the ranch. After 11 years, Brent and Julie moved to St. George, UT near their daughter, Summer in 2021. This is where his mortal story ends on January 15, 2023.
A graveside service will be held on Saturday, January 21. 2023 at 11:00 AM at Larkin Sunset Lawn, 2350 E. 1300 S., Salt Lake City, Utah. In lieu of flowers, memorial contributions can be made to the Church of Jesus Christ of Latter-day Saints humanitarian aid http://Philanthropies.churchofjesuschrist.org/humanitarian-services

Lovely picture. The service was really a feel good hour in what I imagine was a tough week. Your family is awesome! l love that Brent was best friend to each of your children, as tough as it makes this passing. What a terrific legacy he has left. Loved the pictorial montage. Edith said that day at lunch, “Wow! They had a lot of family vacations!” So much love to you all.

You all are, of course, in my thoughts and prayers.

Please know how much I respected and appreciated Brent. He was a uniformly tender and compassionate man , precious traits sadly lacking in most of us in today’s world. And although I never spoke of it, on several critical moments in the darkest time of my life when our paths crossed at family meetings, he always took the time — without judgment or choosing sides —- to assure me that I hadn’t failed, that God unconditionally loved me, and that, in his words, “things would work out well in the end.” That support meant the world to me. May his sweet spirit be with you and your beautiful family constantly until you are reunited forever.

Dear Julie, April, Adam, Summer, Casey and Baylee-
Wishing you comfort and peace during this difficult time.
Sending love to all.
Cindy Tuddenham

Brent Schenk was a great friend and mentor as we grew up together in the St. Louis 3rd Ward and during our years at Nipher Junior High School and Kirkwood High School . We shared many Scouting experiences , trips to Steak N Shake for a burger and were roommates at BYU following our respective missions. He was always a positive example with an infectious laugh and smile . I can truly say I am a better person for having known Brent Schenk . Brent will be missed but his so many positive memories from our friendship will continue to live on forever.

We are so sorry for your loss. Our lives were blessed knowing Brent. He will be missed.