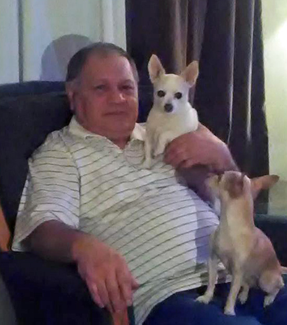 Jr. was born in Montrose Colorado, and was a resident of Salt Lake City for over 30 years. He is survived by his wife Sharlene (sister-in-law Darlene), eight children: Jerimy (Marrita), Jason, Natasha (Shawn), Donny, Melissa (Jesse), Benjamin, Bobby and Dawn and two stepdaughters Jessica and Shawntel. There are many more individuals that Jr. had taken under his wing who only knew him as dad. Jr had 17 grandchildren and 13 step-grandchildren, he also had three great grandchildren and five step great grandchildren. Jr. is also survived by his god-daughter Veronica Hernandez (Negra) and his three beautiful sisters Ruby, Linda (Joaquin) and Elaine, as well as many uncles, aunts, nieces, nephews, and cousins.

He is preceded in death by his parents; Donald and Olinda Vialpando, step-father Steven Chavez, his grandparents, (Charlie and Beatrice Herrera) his brother Jake and brother-in- law Phillip Martinez, daughter-in-law Kristin and many other family and friends.

Jr was a mechanic for most of his life, always working on cars with his brother who passed before him. He loved reading, especially Louis L'Amour and was an avid animal lover, especially his Chihuahua Baby. He enjoyed watching western movies, old or new and he loved watching the Denver Broncos. He will be greatly missed but never forgotten, until we meet again.

Memorial services will be held at 2:00 pm on Friday, January 27, 2023 at Larkin Mortuary, 260 E. South Temple, Salt Lake City, Utah. There will be a visitation from 12:30 to 2:00 pm prior to the services. For those unable to attend in person, you may click on the "Watch Services" tab above. A Zoom account is required.

You will be missed my old friend condolences from Montrose Colorado

I'm going to miss my brother for ever and ever rest in piece brother.love you

My deepest condolences to the family...grama...steve...Jake and junior are together again.... rest in peace
....you will be missed

Sharlene and all of my nephews and nieces...I know it is going to be hard on you all but believe me when I say he will never be forgotten. I have so many memories of my brother and none of them are bad or sad just being siblings. He was the best big brother any girl would want to have.

I am i sorry for the great loss your family is experiencing. My prayers go out to you. I pray you can find peace and comfort at this time with your loving family.