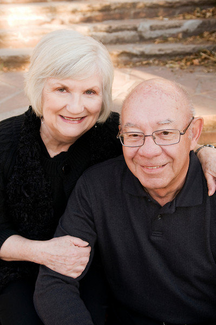 Dorothea Glenda Moore Gaudig was born March 10, 1946, in Leicester, England, to Harry and Emily Dorothea (Dorothy) Laraman Moore. She passed away peacefully surrounded by her children on January 9, 2023.

She was the oldest of three sisters. Her family moved many times during her childhood, including a two-year stay in Ontario, Canada- which she stated ‘the winters there were bitterly cold.’

On returning from Canada, the family finally made their home in Nottingham, England. Since she lived there the longest, she called it her hometown.

Glenda attended Trent Bridge Secondary School for Girls, Nottingham, England. She took a course in shorthand and typing, which led to a job with General Accident, Fire and Life Assurance Corporation (GAFLAC).

Glenda found her faith in her lord and savior Jesus Christ and was baptized into The Church of Jesus Christ of Latter-day Saints in October 1963, at the age of seventeen. She served a mission for the Church in the British South Mission, from 1967 to 1969. In 1969, she emigrated independently to the United States, and worked for the Church in President David O. McKay’s office, and the Missionary Department. Glenda continued to have many callings in the Church through her life, including ordinance worker in the Oquirrh Mountain Temple.

Glenda sold her beloved VW bug so she could move back to the UK but was asked to fill in for a work friend on a blind date- which led her to meet the love of her life, Bud Gaudig. They married on August 3, 1972, in the Salt Lake Temple. They had five children, Christopher (Corinne), Meredith (Tim) Anderson, Rachel Moody (Joel May), Lindsay Gaudig and Leah (Tim) Bird. They had six grandchildren, Taylor (Kadee), Makenzie, Corah, Zoe, Van, and Gwen, as well as four bonus grandchildren, Abigale (Arianna), Damian, Rabecca, and Jaxon.

Glenda worked for the Utah Department of Transportation for eleven years as an Administrative Secretary to the Region Two Director. She retired in 2008.

Glenda is survived by her children, grandchildren, and sister Christine Janet (David) Labrum. She was preceded in death by her dear husband and Navy boy Bud, sister Valerie and son-in-law Jeff Donnelson.

Services will be held at 11AM on Friday, January 13, 2023 at the Anthem 4th Ward Chapel, 12352 South Bigbend Creek Drive in Herriman. A visitation will be held prior to services beginning at 9:30AM. Interment to follow at the Wasatch Lawn Memorial Park – South Valley in Riverton Utah.

Funeral services will be streamed via Zoom for those unable to attend in person, or wishing to attend virtually. To watch the previously held funeral services, click the "Watch Services" link above.

Glenda was a good friend and neighbor. We enjoyed our associations with both Glenda and Bud here in Herriman. They are wonderful people and we will miss them. We send love to their family.

So very sorry to hear about Glenda. I am married to Les Gaudig, a cousin of Bud's. The last time I saw your mom and dad was at a reunion in 2009. I had a great time talking to her about England. Prayers to all of her children during this trying time.

We are in shock to hear of your Mom's passing. We are deeply touched by fond memories of your family as our dear neighbors. Glenda was a stalwart example to all who had the privilege to know her. Our love and prayers are with your family. Love Stan & Pat Busath

We are so sorry for your loss and. Glenda was such a wonderful woman. My mom told me a few stories about how she and a friend set your dad and mom up on a blind date. My mom(Bev) and Dad(Mel) went with them to dinner. They were talking and making jokes when Glenda dropped the salt shaker into her drink and didn't know what to do. Glenda was so serious about this but Bev, Mel and Bud chuckled. Finally Glenda started to laugh with them.
The memories that she has created for the Ingersoll family is priceless.
We love you Chris, Meredith, Rachel, Lindsey and Lea.
Our thoughts and prayers are with you during this trying time.
Love
Beverly and Sherie

Fond memories of a wonderful aunt, who will be forever in our thoughts. Xx