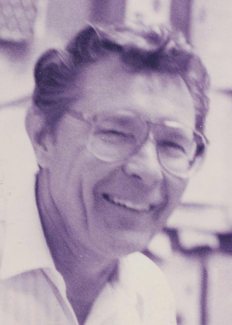 He married his sweetheart, Colleen Jackson Hunt on March 16, 1957.

Lorin obtained his master’s degree in education and fine arts from the University of Utah.

He attended West High School where he was elected the Student Body President and loved playing football for West. After college, he returned to his alma mater and spent his entire career as a true Panther.

He was an ambitious young man who also co-owned a gas station.

Lorin touched the lives of thousands of students during his career as “Mr. Hunt”. Because of him, many students continued to pursue their love of art.

During the summer, Lorin worked for the Boy’s Club with inner city youth where they participated in boxing, basketball, and other activities.

As a talented artist, painting was his peaceful respite from everyday life. Some of his favorite subjects were landscapes and florals which were displayed in his home.

At the South Cottonwood 2nd Ward, he served in church callings and taught Sunday school. He also printed the ward newsletter which was called The Communicator.

Lorin is now at peace. We are so blessed to have had a wonderful, loving father like you who is greatly missed. Until we meet again . . .

Lorin is survived by his three children: Gordon, Lori Cox (Brent) and Lisa; his sister Linda Thompson (Max), three grandchildren and four great grandchildren. He was preceded in death by his parents, his wife, Colleen, and his brother Gary (JoAnn).

Condolences may be left for the family at www.larkincares.com

Mr. Hunt was my ceramics and art teacher at West High. He was always so kind! I’m sad to hear of his passing and would like to give my condolences to his family. Rest in Peace Mr. Hunt!

Mr Hunt was always one of my favorite teachers at West High. I attended fromn86-89.He was also my mother's art teacher when she attended West High from 67- 71. Because of him I learned the love of Art, and ceramics I still have many of his pieces that I made in his classes. He will be truly missed my condolences to the family.

Mr. Hunt was the best teacher I had west 73 to 75 I still have the vase displayed in my house along with the cookie jar he will be missed featherweight you and the family

Such a good guy, he will always be missed. RIP Mr Hunt😞

Such I cool guy amazing teacher myself and my husband had Mr. Hunter for art art West 1990s

Mr. Hunt was my favorite teacher 70 -73) . I always new he cared about me. He truly helped me to believe in myself.
May he rest in God’s peace.