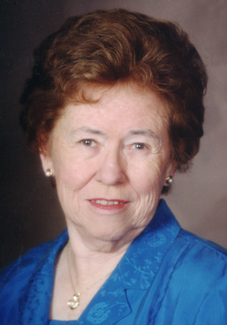 Marva Lucinda Hillyard Egbert passed away peacefully on January 14, the day after her 97th birthday. She was born on January 13, 1926, in Cornish, Utah to W. Hazen and Ruby Nilson Hillyard, who were loving and devoted parents. She married her eternal companion, David Wesley Egbert, on July 19, 1950, in the Logan Utah Temple. They were happily married for 53 years before David passed away in 2003.

Marva spent a delightful childhood living in Smithfield, Utah. She was the middle child with two older brothers and two younger sisters.

Marva attended North Cache High School, where she participated in seminary, the Home Economics Club, Chorus, played the piano in the orchestra, served on the Student Court Council, and was editor of the yearbook. She then attended Utah State Agricultural College where she served as an Officer of the Home Economics Club and Associated Women Students. She was also a member of the following student organizations: Alpha Chi Omega, Upsilon Omicron – scholastic honor society in the field of Family and Consumer Science, Sponsors – a military women’s auxiliary and yearbook staff. She graduated in 1948 with a bachelor’s degree in Vocational Home Economics. Marva taught school in Springville and Hyrum, Utah.

Marva cherished music and playing the piano. At the age of 14, Marva performed an hour-long recital of classical music, which was all memorized. She enjoyed accompanying others as they performed, and delighted in teaching young students to play.

Marva was a devoted member of the Church of Jesus Christ of Latter-day Saints. She and David had many opportunities to serve in church callings and served for many years in both the Chicago and Bountiful temples.

For more than forty years, Marva and David enjoyed living in Berkeley, CA, Washington, DC, Pittsburgh, PA, and Chicago, IL. In 1992, upon retirement, they moved to Bountiful, UT. They cherished the many friendships made through the years in each of the places they lived.

Marva had a great interest in real estate and investing in the stock market. She enjoyed sharing that knowledge with others. She and David enjoyed traveling to England, France, Scandinavia, Egypt, Israel, China, Hong Kong, and Oberammergau, Germany.

Marva was an exceptional homemaker, mother, and grandmother. She cherished her family and loved them deeply. From her example, we learned the importance of family, education, and living the gospel of Jesus Christ. She spent many hours helping and serving those around her.

The children would like to express our sincere gratitude for the kind and loving service provided by Creekside Senior Living and Inspiration Hospice.

Funeral services will be held at 11:00 am Saturday, January 21st, 2023 at the Oak Hills Ward Chapel located at 455 S. 1200 E., Bountiful, UT. Friends and family will be welcomed at a viewing at the Oak Hills Ward Friday from 6 to 8 pm and Saturday from 9:30 to 10:30 am. You may watch a recording of the service online through Zoom using the following link:

Interment to follow at the Smithfield City Cemetery at 2:30 pm.

We are sad for your loss and yet grateful that Marva is now with David. I had the chance to take her to Church in John’s Ward while I was in town a few years ago. She was 94 then. The pickup I was using from my Salt Lake office was jacked up pretty high. But Marva was game. With my help she climbed up into the truck in her garage then climbed down at the church. Then we did that in reverse after the service. When I got her home she fed me till almost busting then kept trying to feed me more. Then she showed me a whole dining table full of genealogy; books and pictures. I’m glad that she was as spry as she was for as long as she was. God bless all my cousins and their families with comfort and peace at this time. It’s comforting to know that you all have testimonies of what comes next. Bless you all Tom and Marlene

I would like the family of Marva Egbert to know how much joy Marva has brought me as a dear friend for many years. Sending my condolences with love, Carol Badham.

We would like to express our sincere sympathy at the passing of your dear mother. She was a marvelous lady who blessed the lives of each member of our family with her wonderful faith, kindness and service. We pray you will be comforted during this tender time. We cherish our joyous memories of visiting in each others’ homes. We love the great legacy and heritage your parents have left behind for all who were blessed to know them.