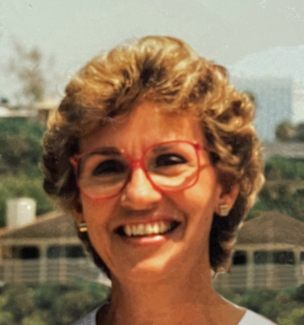 Memory was born to Frank Howard Turner and Ellen Marie Irion of Shreveport, Louisiana, the first of what would be two children, both daughters. Her sister, Caramia Aletha, would arrive eight years later, carrying her maternal grandmother's name. "Memory" was named in honor of a good friend of her mother's, who carried the name as well. While her father was a successful businessman, Memory's mother was a talented musician and dancer who toured the country professionally in the 1920s, joining the New York City Rockettes, before establishing her own dance studio in Shreveport. Memory's maternal grandparents, John and Aletha Irion, were converted to the doctrines of the LDS Church after a three-day reading of a Book of Mormon given to them by a librarian and personal friend at the Shreve Memorial Library. They then requested baptism into the faith Memory treasured throughout her life. Her father, Howard, joined the Church after a period of faithful study and belief, being baptized the night before he married Marie. The family would become the source of establishing the Church in Northern Louisiana, and Memory's parents were honored by having their names placed in the cornerstone box of the Dallas Temple.

As she matured, Memory took up and preserved the cultural marks of the South as a society, personifying its expectation of mannerly conduct, careful dress, quiet conversation, understated opinions, respect for others, and personal integrity. Along with that heritage her mother passed on dancing skills to Memory, who proclaimed as a teenager that when she graduated from Byrd High School (where she was one of just three LDS students), she wanted to appear on Broadway as her mother had done. Understandably, her mother swiftly and decisively vetoed that plan, which resulted in Memory entering BYU in the fall of 1961, majoring in commercial art. Seeking adventure beyond the confines of college life, however, she applied to enter the Delta Airlines Stewardess training school in Atlanta, Georgia, and of the four hundred young women in that class of applicants, Delta selected only her to join Delta. Following receiving her "Wings," she was assigned to Houston and flew the new big jet service routes to New York and Chicago, where she had the initial distinction of being the only airsick stewardess in the fleet.

It therefore was not long before she abandoned that career to marry Michael T. Lowe, a farm boy from Kaysville, Utah, whom she met on that first evening of the first day of term at BYU in 1961. They were sealed in the Salt Lake Temple on November 23, 1965, following his return from the LDS Mission to the Northwestern States. Upon getting off the plane, he immediately borrowed his father's keys to a big DeSoto and drove to Penrose Hall. When she saw him get out of the car she said to herself, "He is the one." Of course, Memory had been "The One" for him since their first meeting, and they took life up with Michael's transfer to the "U" and subsequent graduation from law school. They then moved to Fullerton, California and remained there for forty two-years. Their great romance came with professional success, four sons and a much-favored daughter. Memory served in every possible women's Church organization, including Stake Relief Society President, at a time when the women of the Church often struggled with the tension between society's interest in workplace success and the responsibilities of creating and maintaining a safe and proper family home. In light of that dedication to the wellbeing of LDS women, Stake President Owen N. Harris called her to organize a series of Women's Conferences, each comprising multiple classes taught by prominent LDS women (and yes, men as well), and featuring such keynote speakers as Emma Lou Thayne, Carol Lynn Pearson, Dr. Gay Sandler Smith, Beverly Johnson, Jo Ann Ottly, Kathleen Hinckley Barnes, Jodine Wood, Dr. Keith Merrill, Elizabeth Shaw Smith, and Julia Bauchiero. The conferences went on for 8 years.

Memory led this life of faithful service and accomplishment while defeating breast cancer twice, herding huge family dogs including a Newfoundland, a bullmastiff and three Labrador retrievers, becoming a master chef, baker and interior decorator, joining the staff of the Fullerton College Theater, and delivering meals to those in need through the Meals on Wheels Program. She loved her August vacations to Balboa Island and Newport Beach, skied with children strapped to her, and became an expert on all of the sports her children participated in, particularly football and basketball. She was a huge Utes fan, followed college and professional sports, and would watch games while professionally "needling" complex needlepoint pieces.

There were a few things she did not enjoy, one of which, after 42 years, was Southern California's eternally perfect and seasonless weather. So, she and Michael took their great romance to Salt Lake City upon Michael's retirement in 2009, where Memory could enjoy some seasons, and particularly the heavy snowfall she loved as much as the new associations and friends she developed in the Monument Park 13th and Indian Hills Wards.

Put simply, Memory Lowe was a woman of substance and deep personal faith, and was loved by all who came to know her. She is preceded in her sudden passing by her parents and grandparents, and survived by her husband of 57 wonderful years, Michael; her sister, Caramia; five children, their spouses, and ten grandchildren, all of whom she treasured and loved. They include Michael and Annie in Denver, Colorado; John in Long Beach, California; Shannon and Spencer in Salt Lake City, Utah; Matthew and Yeissen in Costa Mesa, California; and Mark and Alexis in Draper, Utah. Memory's grandchildren are Turner, Gryffin, Olivia, Madison, Max, Caroline, Jack, Henry, Thomas and Dillon.

In lieu of flowers, donations can be made to the Huntsman Cancer Society and/or the LDS Humanitarian Aid.

For those who wish to view the recording of the services click here: https://us02web.zoom.us/rec/share/H5XT8xenPzLrrndPU2xKycKHMdjEwqEfCFJgg9SgsDGXxLfxGxEfKXFHR1-fD9HJ.snpMPa-EQRtGycZv?startTime=1674495839000

Sorry to hear of Memory’s passing. We loved associating with her at church. What a classy lady she was.

Wow, what a shock to know of Memory's passing this morning. Her long-time friend, Sandra, will soon be joining her in the great beyond. We have loved Memory, and Michael, since knowing them in Bonneville Ward while Michael was in law school, and renewing the friendship when they came back to SLC. Memory was such a ray of sunshine, always. And Michael and Don have shared many good discussions on legal matters and on Gospel doctrine and history. Michael was our favorite Sunday School teacher. Memory was a favorite "light up the room" person.