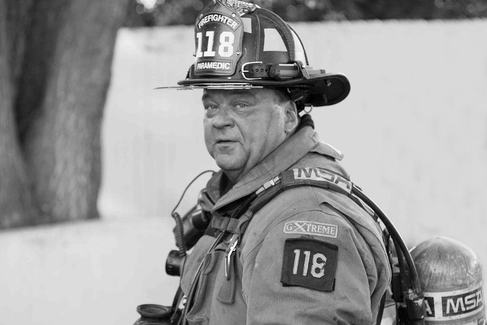 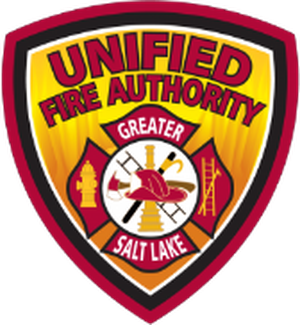 With great sadness we announce the passing of Merrill Lloyd Bone, 61. Merrill passed away peacefully October 31, 2021; he was surrounded by both his immediate family and his fire family during his passing. During his battle, Merrill was never alone. He spent his last days being visited by his family and guarded by his fire brothers.

Merrill has now been reunited with his parents, John Lloyd and Beverly Jean; his siblings, Lisa, Shari, and Bradley; his grandson, Liam; his aunt, Pat; and his beloved dog Snip. Merrill will be deeply missed by his loving wife (Laurie); sister Kim Bone; his children, Travis (Victoria), Maegan (Konrad), Emily (Sydney), and Trevor (Kristin). As well as his stepchildren, Tonia (Chuck), Hardy (Ruby), and Mandy. He was affectionately known by his adoring grandchildren, Aiden, Ozzy, Addison, Ethan, Brielle, Graysen, Holden, Charlotte, Milo, Norah, Ava, Oakley, Caydence, and Charley, as “Papa Bone”, or “Black Papa” when he was in his motorcycle gear.

Merrill lived a fast paced and exciting life. He enjoyed spending as much time outdoors as possible. He loved fishing, camping, hunting, and as a younger man, bull riding. “There isn’t a bull I can’t ride.” If he wasn’t spending his time outside, Merrill was working as a “jack-of-all-trades” or riding his motorcycle with his brotherhood, the “Leatherheads” MC.

Captain Bone lived a life of unequivocal service. As a 39-year veteran firefighter, he spent most of his time in the service of others. Throughout his fire career Merrill worked and retired from different departments within the state of Utah. He worked from his EMT to his Paramedic license and then moved onto the rank of Captain, all while continuing to obtain multiple undergraduate degrees and working on a graduate. Captain Bone was known for his expertise in any area of fire education and training and for the feeling of deep brotherhood he held so close to him. This led him to being a member of USAR, wildland firefighting, being a member of Task force 1 and many notable deployments, including the rescue and recovery operations of the 9-11 New York attack. Known for his “Merrill-isms” and quick wit, Merrill was loved by every soul he reached.

There was never a challenge Captain Bone wouldn’t face head on, including his recent fight with cancer. He struggled, defeated cancer, and once again returned to his fire duties. He never took the lives of others for granted, he was vaccinated against Covid-19, but his fight had left his immune system compromised. After contracting the illness, he fought a new battle to recover, and now is at peace.

Since losing Captain Bone, our lives will never be the same.

The family kindly requests all in attendance at the viewing and funeral wear masks to help keep everyone safe.

For those unable to attend in person, the funeral services will be live streamed by clicking the “Watch Services” link above, or through the following link: https://www.youtube.com/c/UnifiedFireUtah/live.

Memorial contributions can be made at any Firefighters Credit Union or via GoFundMe.
https://www.gofundme.com/f/bone-family-support?qid=9abac62227f73c95f5bb0c804dc8420d

We were long time friends of Merrill back in the late 1990. We kept n contact by email and text time from time. We are so sorry to hear about your lost . Merrill was always a fun guy to be around and have a great time with. Always looking out for others. Lee Paul

I had the opportunity to meet, and work with Merrill since 2019, and while I have only known him for a few years, he was someone who touched my heart! Merrill was a special soul, that anyone would be lucky to come into contact with. Gone but not forgotten! My deepest condolences to the family!

I had the opportunity to work with Merrill over many years, as an ER physician and a Medical Manager in Utah Task Force One USAR. Merrill always made my job and my life easier. He could be counted on to do the right thing, and everyone benefited greatly from his intelligence, good judgement, experience and his sense of humor, and kindness. He made everyone around him better.

Travis & Victoria,
We are so sorry for your loss. It was a great service he sounds like he was a great man and well liked. We are sorry we never got to meet him. We are thinking of the whole Bone family and hope you all can get through this terrible loss.

To Captain Bone's family and fire family,
I am so sorry for your loss. I was the team veterinarian for UT-TF1 from 2011-2019 and worked with Merrill. The medical specialists were always welcoming to me, even though I was a civilian, not a firefighter, and from veterinary medicine, not human EMS. Merrill taught me a lot about disaster and emergency medicine.
He was a good man.

To the Bone Family,
On behalf of Myself and Salt Lake County Animal Services, I would like to express our deepest sympathy and offer our prayers and thoughts to you. No words can express the sorrow you are going through, but may it help to know that Merrill's expertise, helped to protect the community in many ways and teach others about heavy and large animal rescue. He was one of Animal Services biggest supporters and was always there for us if we needed him. He will truly be missed by all.
Sincerely,
Lt Carrie Hecht
Special Operations
Salt Lake County Animal Services

I met Merrill when he and Craig Outzen came to Sonoma, Infineon Raceway (at that time) to work the NASCAR race. Over several years we worked NASCAR races at Infineon and Las Vegas together. Merrill was a great guy to have on the safety truck with you. Cool and calm the few times we got called on track, and kept us busy with stories. I was saddened to hear of his passing. My condolences to family and friends. Merrill was a wonderful person.

Laurie, I send my deepest sympathy to you at this time in the loss of your husband. I have so enjoyed working with you this past year, I consider you a friend. I remember how scared you were when you thought Merrill’s cancer had returned and your relieve when you found out he was ok. You both got Covid, bless you, I’m so sorry for the outcome. I didn’t know Merrill but what I’m reading tells me what an amazing man he was. May you and his family find peace at this time, and may you know you are in my heart and thoughts.

30 yrs later and I still remember Bones teaching our EMT class. A fun guy with a huge sense of humor. Godspeed

I am deeply saddened from the news of Merrill's passing. Our paths first crossed when we were hired onto the Salt Lake City Fire Department in 1985. I cannot comprehend the grief you must be feeling as his family. My thoughts and prayers are with you at this time. Merrill was a great guy, I have many fond memories being with him.

Papi, I will miss you dearly in my life BUD and I'm sure so many feel the same. Fire Bone, so many moments, laughs, hugs, stories, anger, and tears over the last 25 years that can never be replaced. Yeah, you can add a little Crown Royal to that for smiles. You are the description of "mentor" as I've watched so many be privileged to be under your instruction. I loved and will miss traveling the country with you delivering the good news even though our news ruffled a few feathers. I never knew a challenge or a need to great that ever kept you away. You always placed others before yourself and represented the greater good in all of us. Your humor was the greatest of all time and it will have folks laughing and shaking their heads for generations!
I found a patch in your equipment locker box I had to share... "T--X MTT ReWrite...Moral Stops Here!
Merrillism's To Live By!

Lots of great memories with Merrill, especially all of Grandma Bones Christmas parties. Thank for being great not only to your family but a hero to the community that you served for so long! Proud to call you family!

So sad! My prayers are with you.
I have many fond memories of playing and working with Merrill and his sisters at our Grandma and Grandpa Bone’s house! He had such a big personality and was always the life of the party.
I have been comforted at the thought of his reunion with our loved ones that have gone before. I hope you will feel of that comfort as well. Sending love! Kathy

Thinking of all he has done I’m so proud to have known Merrill and lucky enough to call him my cousin. With deep respect I send my condolences to the family

You will be dearly missed my friend 🙏🏻💕