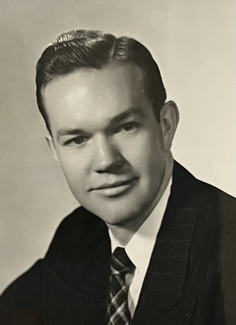 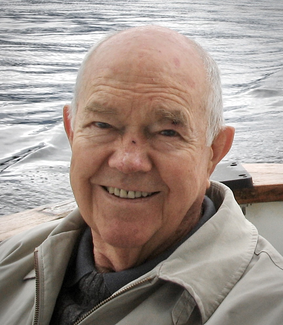 Born November 6, 1926 in Logan, Utah, Reed was the youngest of five children born to Anna Laura Andersen and Joseph Hammond Watkins Jr. Reed is preceded in death by his parents, his brother Joe, his sisters Mildred, Margaret, Ruth and a great-grandson Dante.

Reed grew up in Logan and was a very curious and adventurous preschooler who would slip away from home and go exploring. On one such occasion Reed’s parents were called from the hospital reporting that their son was there. Reed had learned that he had a new cousin and had gone from room to room looking for him. For a few years, until he had explored everything he wanted to, Reed ran away nearly every day. Reed attended Wilson Elementary School and the Logan Junior and Senior High Schools, graduating from High School in 1943 at age 16. He spent the latter part of 1943 working for his brother-in-law herding turkeys and then attended college until he joined the US Navy at age 18, serving just a year as World War II ended shortly thereafter. Reed served an LDS mission in the Eastern States from 1946 to 1948. During this time, he was part of a 10-man group called the Utah Centennial Chorus. He both sang with and accompanied the group as they performed at various locations throughout the mission. After completing his mission Reed continued his education at Utah State Agricultural College (now Utah State University) where he earned a Bachelor of Science degree in piano performance in 1951 and at the University of Utah where he earned a Master of Arts degree in music in 1953. By this time, Reed’s career course had changed and he moved to California to attend Stanford University, earning his Juris Doctor degree in 1956 from Stanford Law School, where he served on the Law Review staff. With his education complete and ready to begin his legal career, Reed moved back to Utah, settling in Salt Lake City, where he practiced law for many years. Reed was also active in Church and civic affairs, serving in many capacities including Bishop, High Council member, ward choir director and as an elected member of the Utah House of Representatives. In December 1979 Reed was accepted into the Mormon Tabernacle Choir and served as a musical missionary for seven years, visiting many countries throughout Europe, Asia, Scandinavia, North and South America, the South Pacific and the former Soviet Union.

Reed loved sports. As a teenager he played many sports including football, tennis, and basketball, but his primary sport was golf. Reed played on the Logan High School golf team for three years and spent a lot of time caddying on the Logan golf course. At the age of 16, he won the Logan Amateur Golf Tournament, defeating the defending champion. He was an avid golfer throughout his life, always eager to play a round, especially with his children and grandchildren. Reed also enjoyed sports as a spectator, both on television and in person, attending many Aggies and Utes football and basketball games. In his later years, Reed would eagerly await the arrival of the Deseret News so he could cut out the weekly televised sports schedule and mark the games he wanted to watch. He enjoyed being at home in his study reading, watching television, working on crossword and sudoku puzzles, and loved talking with family and friends who called or came to visit.

There will be a viewing on Saturday January 28, 2023 from 12-2pm followed by a graveside service at Larkin Sunset Lawn located at 2350 East 1300 South in Salt Lake City.

Diane and I send our love at this tender time. Reed’s dad Joe and my mother Clara were the oldest And the youngest of the Joe and Ella generation. With fond memories of Reed, Margaret, and Ruth, I treasure the “Watkins” moniker.
The stories are legend! Their escapades, skills, and kindness coupled with unsurpassed music and athletic prowess as well as tireless service to others, church and community are forever hallmarks.
Reed set a high bar in his master of many talents. To each of the family and to you Jeanette, we send our sympathy and thanks for the blessing of sharing Reed’s and. your life with ours.