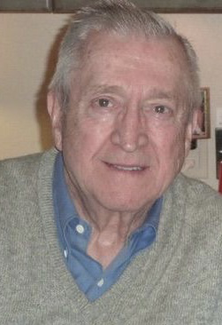 Faithful husband, loving father, treasured grandfather, honored great-grandfather, and, most importantly, a friend to all he met passed away quietly on January 9, 2023. He was born on July 2, 1931, in Hamilton, Ontario, Canada. He married the love of his life and his eternal companion June Clara Mary Jenkins on March 19, 1954, and together they loved and treasured their six children.

Dick joined The Church of Jesus Christ of Latter-day Saints in Toronto, Canada, and later moved his family to Provo, Utah. He began his talented film career working for the CBC in Toronto, but was asked by The Church of Jesus Christ of Latter-day Saints to join the film studio in Provo. He later also taught at Brigham Young University in the film department. Dick was incredibly talented and had a successful career as an independent film maker as well. He faithfully served in many church capacities. He was called as a bishop four times and made hundreds of treasured friends as he humbly helped to shape and change the lives of those he served.

Dick was always learning; he was a ferocious reader and gatherer of information and never hesitated to share his wealth of knowledge with his children and many grandchildren. You could always find him busy gardening, creating, remodeling, building, and cooking. When his declining health forced him to slow down and rest, he continued to embody the kindness, integrity and love for others that guided his life, positively impacting all who interacted with him.

Dick was preceded in death by his daughter, Lezlee, and wife, June. He is survived by his sons, Richard Alma (Paula) Bickerton, Joshua Bickerton, and his daughters, Lauren (Brad) Knowlton, Michelle (Kenneth) Huxtable, and Pamela (Gary) Esmay as well as twenty-four grandchildren and fifty-one great-grandchildren.

Dad, we love you beyond measure and will forever hold you in our hearts as we try to follow your example to love unconditionally and serve all those we meet. Thank you for your life and the beautiful life with which you have blessed us.

Private funeral services for the family will be held. Interment will follow at the Memorial Holladay Cemetery.

To watch the previously held funeral services, click the "Watch Services" link above.

to all the Bickertons,
Dick was My Hero he took me in into his world at a time of great need for my Family.
He taught me everything I needed to know to be successful in our shared passion for film, and i will be forever grateful.
I loved him and and his family, I could go on and on but I loved him is enough
he was a blessing for for me

I was sad to hear of Dicks passing. I spent many wonderful times with Dick on various film assignments for the LDS church. He always was very upbeat and helped the film crew to stay positive. He was very creative and it was a pleasure to work with him.