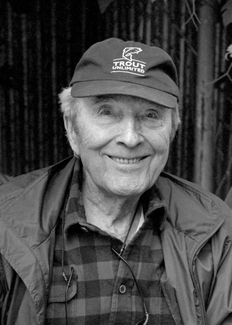 Salt Lake City, Utah-Robert V. (Vern) Bullough, Sr. was born on January 12, 1926 in Seattle, Washington, and died January 3, 2023 in Salt Lake City surrounded by his family. A member of the "greatest generation," dad learned early that hard work and determination are essential to weakening the tightly wound threads of human fate. He worked hard; and he played hard, though not very often.

As a small child in Seattle dad wandered the banks of the stream near the house his father built drawing small, life-like pictures of animals and enjoyed the quiet and wonder of the surrounding forest. Life quickly changed, however. Dad vividly recalled the grim train trip made as a four-year-old to Salt Lake City with his mother, Hazel, and three sisters to bury his father following a deadly illness. Grandma had already buried one son. Arriving in Salt Lake City and discovering that a handshake and a promise is no substitute for a deed, the family moved into Grandma Ridges' large, old and cold, pioneer house near West High School. As the Great Depression deepened, Hazel did her best to support the family.

Dressed in overalls, dad started school at Washington Elementary School where he encountered the first of many remarkable art teachers who recognized and encouraged his talent, and he won the first of his many art awards. Like his father and encouraged by an uncle, as a boy he raised fighting cocks and pigeons fed with grain gathered from the leftovers in grain trains that rumbled and rested nearby. Like other boys in the neighborhood, he skinny dipped in hot springs north of the city. He took whatever jobs he could find including hitching rides to Brigham City to pick fruit and working weekends at his mother's brother's house. In high school he worked at the Union Pacific round house servicing locomotives and later as a machinist's helper at EIMCO. This was hard and often miserable work, but he said the men were kind and helpful. He attended high school part time in a vocational track, and he continued to draw.

Like others of his friends, he accepted the inevitability of military service as World War II raged. While walking around Utah's Capitol Hill pondering his future and increasingly anxious to change the trajectory of his life, he determined to enlist in the Navy, a decision his mother did not support. On his 18th birthday he reported for duty and soon found himself on Coronado Island for basic training and on the crew of the U.S.S. Lubbock, a Haskell-class attack transport. His assignment included tending the Lubbock's engines and as a member of a landing craft crew keeping the engine running which was a major challenge during the battle for Iwo Jima where the fine volcanic sand quickly plugged the filters for the water that cooled the engine. A stalled engine meant disaster. Dad recalled witnessing the raising of the American flag on Iwo Jim and fearsome kamikaze attacks, but only rarely did he speak of his war experience until very late in life and then he would apologize for crying. One lingering effect of his war service was that he did not care much for travel.

After being discharged, back home, the miracle of the G.I. Bill opened a pathway to higher education. Dad was interested in studying everything and anything, but after marrying his Sears co-worker Dolores Elaine Clarke in early summer of 1948 (who thought him very handsome), and anticipating the arrival of a first child, he needed to get serious about a job. What to do? Graduate. He graduated with highest honors with a biology degree and fine arts minor with a teaching certificate in 1950 followed in 1951 with a master's degree in fine arts. More art awards were added to those he garnered in school including at the Utah State Fair in the "professional division." At the U dad was fortunate to study with some of the most significant artists in Utah history whose influence he happily acknowledged. It was, as he often said, a remarkable time. After graduation he began teaching art at Granite Junior High School and later moved to Evergreen Junior High and community education courses in painting. He laughingly said that he taught every challenging boy in the schools. Art took second place. Mom saved quarters and balanced the bills and kept the growing family running while dad scrambled to make a living.

Having long taken side illustration jobs while teaching, an instructorship opened for dad to work in the Graphics Bureau at the U. and despite pay cuts he resigned from Granite School District. Additional professional opportunities came. He began teaching media courses for teachers as well as supporting the wider university community's instructional efforts. He also entered a Ph.D. program, something he had long wanted to do and for which he learned both German and French. Happily, after he finished his doctorate, he was appointed an assistant professor of instructional media which, as a field, morphed and broadened with recognition of the power of technology and of images in teaching and cognition. Over the years his expertise broadened, and, among other publications, he produced bestselling textbooks in the instructional uses of microcomputers and in instructional design. Promotions came over time as did other awards including for teaching and in 1988, he retired as Professor of Educational Studies Emeritus. All the while he continued to paint, sculpt, garden, fish, hunt and cross-country skiing. His artwork is included in several private and public collections around the country. Just before COVID, his sculpture, "The Prophet" was featured in an exhibit at the Brigham Young University Museum of Fine Art. An unfinished painting sits on his easel at home. He painted consistently until two years ago.

We are saddened by dad's passing but grateful he is at peace. A stroke last May made it impossible for him to engage in the clever word play, including with puns, that gave him and us such pleasure. Dad is survived by his loving wife of 75 years, Dolores, and children, Robert V. Jr. (Dawn Ann), Patricia Lynn, and Richard Clarke (Kirsten). Rebecca Ann ("Bub" Horne), their youngest daughter, died in 1998. Mom and dad cherished their seven grandchildren who have been an important part of their care of late and happily looked forward to the birth of a 5th great-grandchild, a girl. Dad lived a remarkable life. We miss him. We wish to thank the wonderful team at The Ridge who helped care for dad and have cared for mom the past few months. Bless them.

Mr.Bullough’, as he was known to me, was my liberator. At Evergreen Jr. High I was accepted by him into a special advanced class and allowed to do remarkable projects that literally changed my life. I had been a very poor student otherwise but this class, as well as taking landscape painting lessons from him in the summer, opened up a world I understood. He was strict with us but also told us silly jokes, and often stopped his little Falcon station wagon for soft ice cream cones in the way back from our painting field trips. I became a professor of art eventually and owe my ambition and sense of self esteem to him and his support and respect for my abilities in those early days. I think of him with so much gratitude. I can only believe that his remarkable spirit lives on in those he taught as well as abiding with his family’ and friends.

Vern was my dad's best friend and like a second father to me. I have so many good memories of hunting and fishing trips with him and Dad. He was a great and talented man and I will miss him dearly.

Thanks for writing this detailed account of Vern's life. Even though I have known him all my life, there was a lot I didn't know. He had a huge impact on my life with the many hunting and fishing trips I went on with he and my Dad Phranque.